Welcome to our website. We hope that you enjoy exploring the site. If you need any further information, please contact us.

We proudly took 28 children to a cross country competition.  All of the children ran well and supported each. Out of 11 teams we came 5th! This is a brilliant achievement!.

One of our Yr4 children received a special 'School Sport Champion' medal. She showed great determination and happiness while completing the course.

Another great evening of sport but this time it was Year 4 who represented the school.  They were fast and bouncy and worked together as a team. 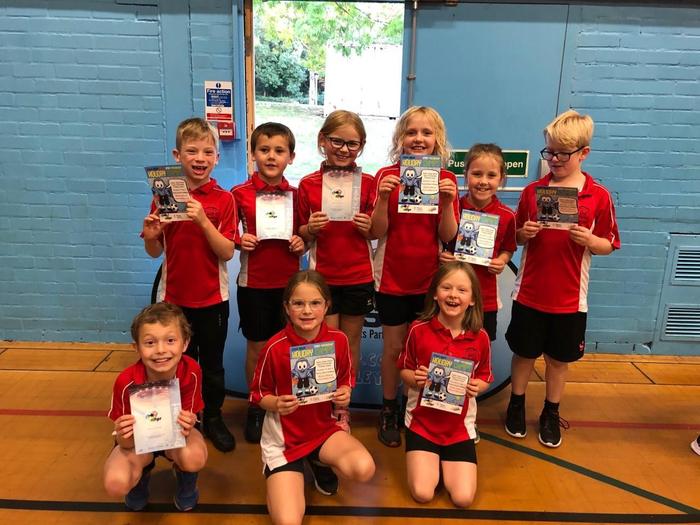 At long last we are able to return to sports competitions with AVSSP.  The Year 5/6 athletes showed great honesty and sportsmanship whilst having fun competing against other schools. 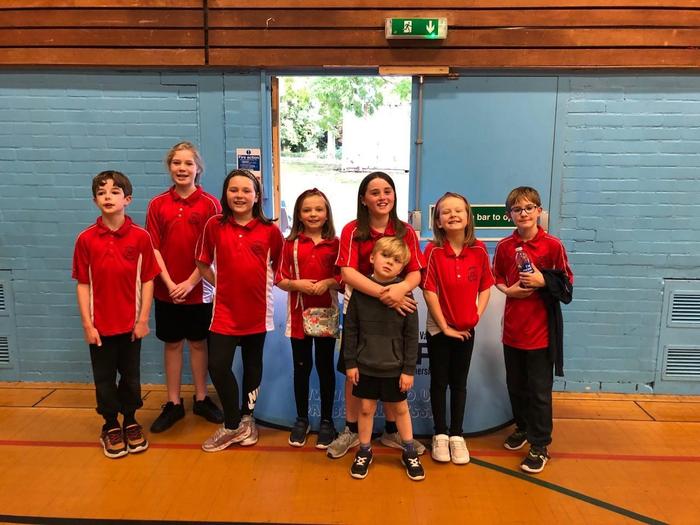 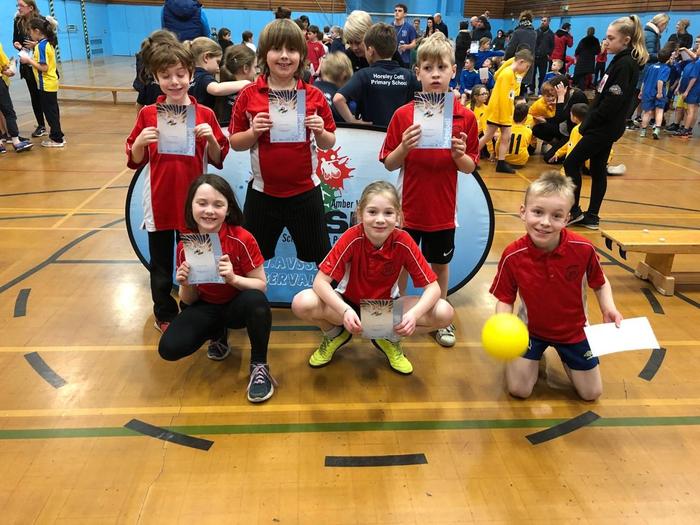 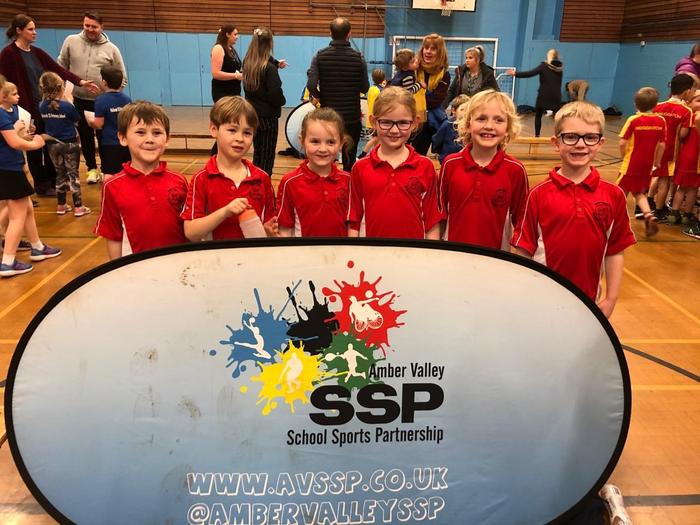 What a great little team with big determination!  They fought until the very end showing great skill and honesty.

We have completed the Aldi sports sticker chart! 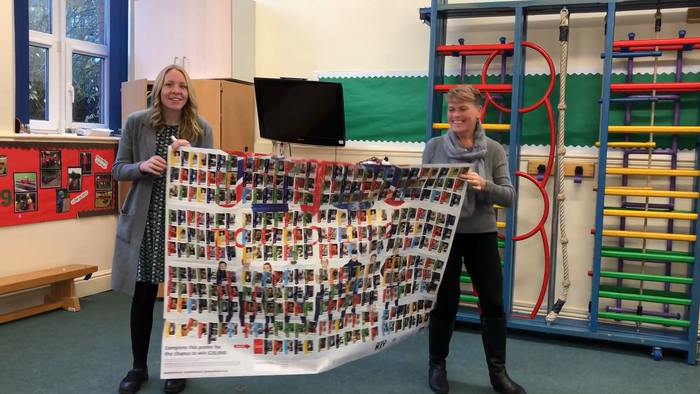 We won the Small Schools category for the second year in a row!  Well done to all that have attended competitions and grown-ups for helping us get there and back 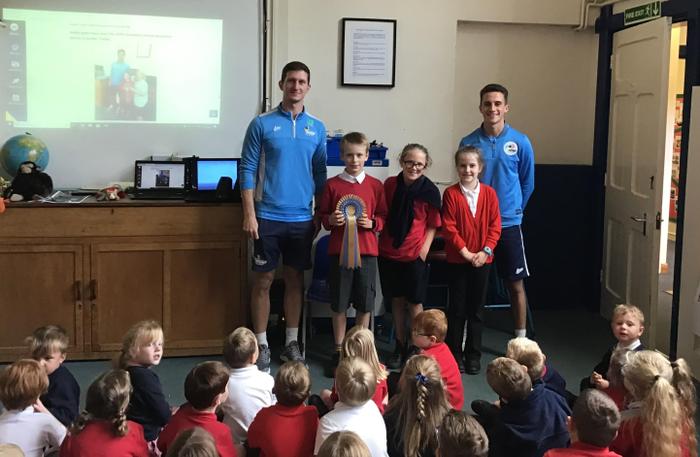 It was great to see 8 children take part in the small schools football competition.  The children won some, lost some and drew some, coming 3rd overall.  The children demonstrated the core values by showing great determination and respect for each other.

A huge congratulations to all the children who took park in the tournament.  The team spirit, sportsmanship and determination was excellent to see. Many goals were scored and fun was had by all. 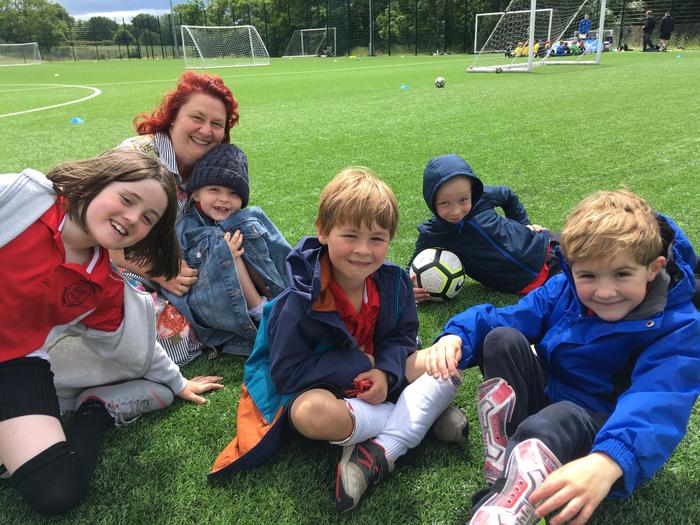 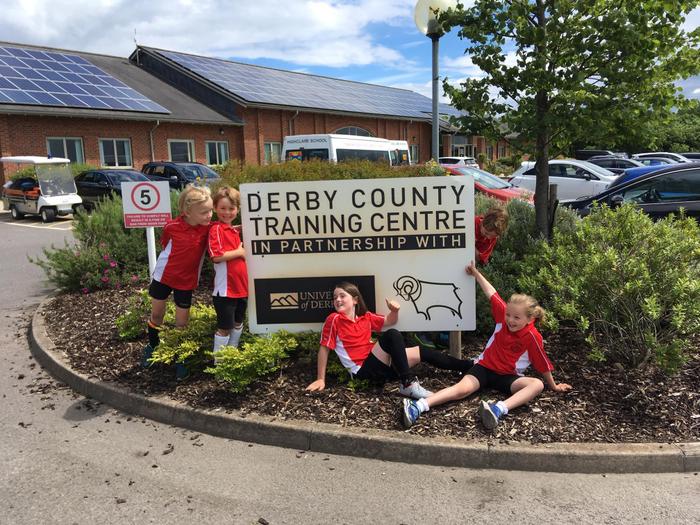 Once again Ambergate Primary School took part in the annual Swimming Gala.  The whole team showed great commitment and team spirit and finished in 4th place.  A wonderful achievement.  I feel super proud to be their teacher.  Mrs Turner

Three children from Ambergate took part in a cyclocross cycling competition at Kilburn Junior school.  There were over one hundred riders there and all three of Ambergate's team did very well.  They will compete in Round 2 on Thursday 20th June. 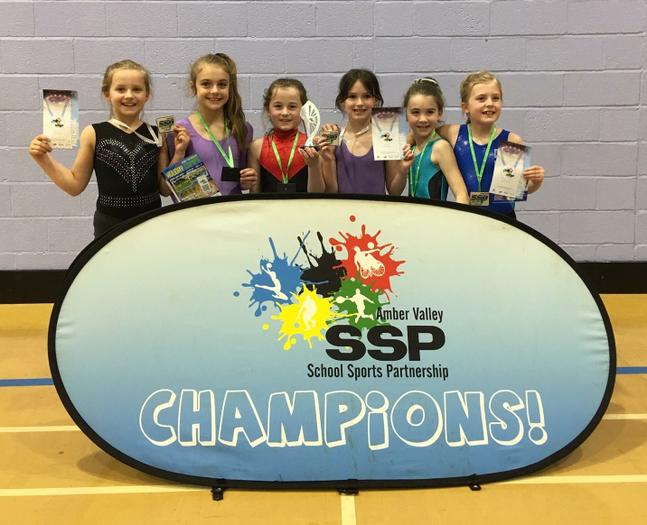 Year 1 and 2 children competed in a dodgeball competition. They showed great sportsmanship and teamwork. We won lots of matches and scored lots of points. A great time had by all!

A team of Year 5 and 6 took part in an indoor rowing competition. Ambergate worked hard and showed some great team attributes! We came 3rd in the girl's endurance race and 2nd in the boy's endurance race. It was a great opportunity for everyone to try something new! 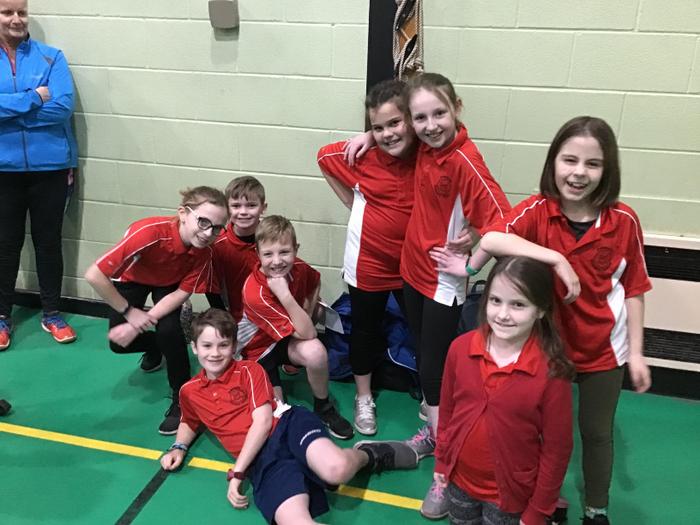 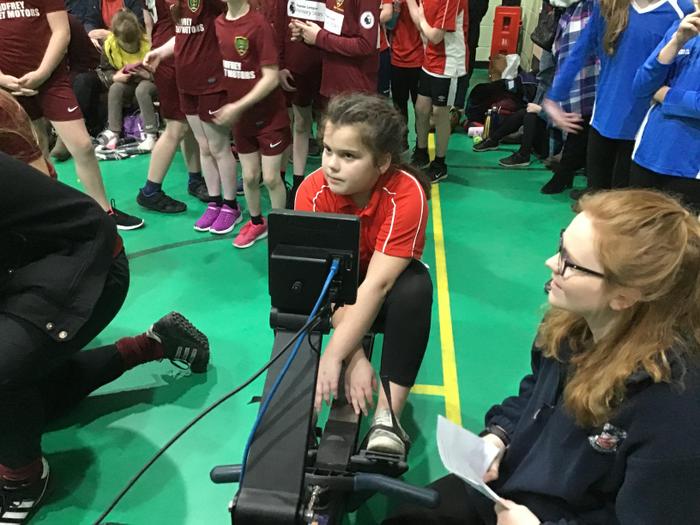 Ambergate Primary School won 2nd place at the tag Rugby Festival!  All those who took part should be very proud of not only their achievement but their team spirit and sportsmanship.  Well done.

A team of Year 5 and 6 took part in an indoor athletics competition.  There were some fast teams to compete against but Ambergate worked hard and demonstrated great teamwork and sportsmanship.

An amazing team of Year 1 and 2 athletes took part in an indoor athletics competition.  Their little legs moved them far faster Mrs. Robertson or Mrs. Turner! Well done to all those who took part. 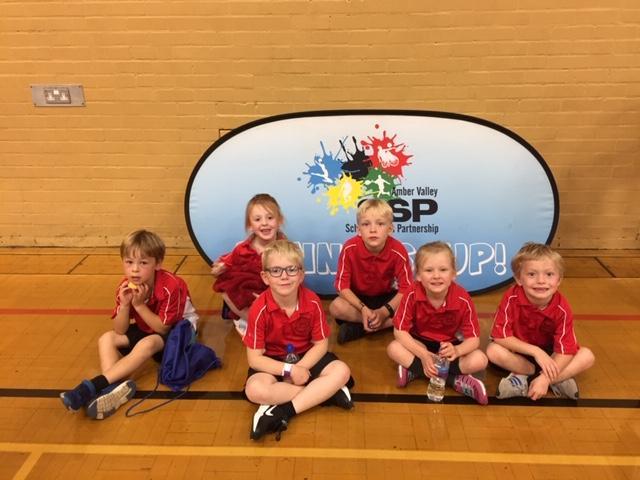 Yet again 15 children had the opportunity to take part in the Brownlee Triathlon.  They all worked very hard to swim, cycle and run.  Everyone who took part received a medal, t-shirt, swimming cap and a goody bag.

Ambergate have won the 2018 Champion School Award for sports in Amber Valley.

Ambergate Primary School is proud to be part of the Amber Valley School Sports Partnership.  Together we have been able to ensure that all of our children are able to play competitive sports against other schools.  Mrs. Turner is the sports coordinator and over the last two years, we have moved from the schools Bronze award to the Silver.

In the final round of the Go Ride ride competition all children that took part did fantastically well.  William was awarded 3rd place. 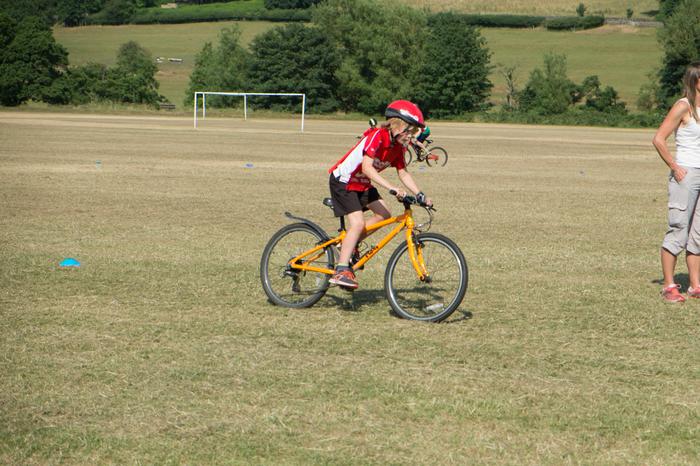 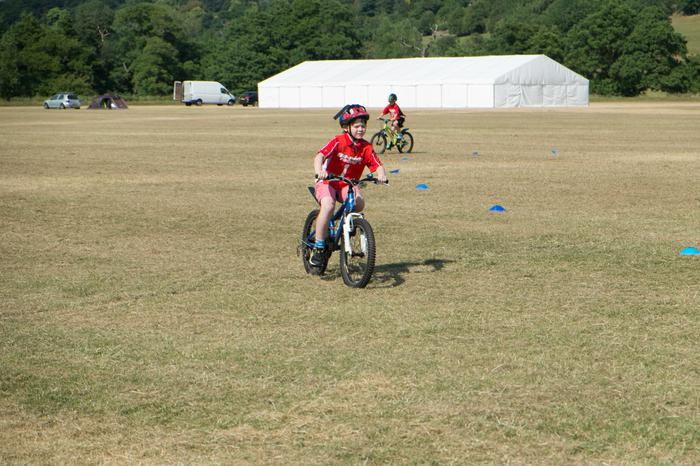 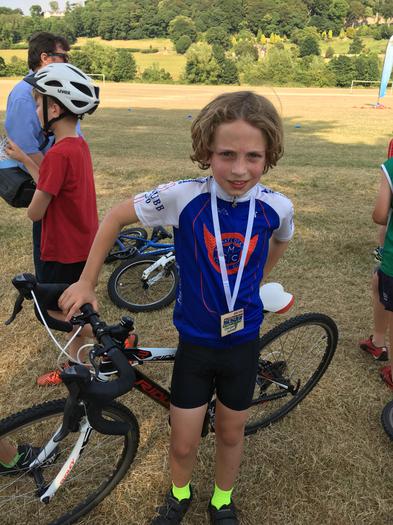 A group of 5 children took place in the cycling event this week and all did extremely well and are scoring high on the score board.  One child even stopped and put his own chain back on during the race!  The third and final round will be held on Wednesday 4th June at Eyes Meadow.

A team of 12 Year 5 and 6 pupils represented the school at a swimming gala.  Each child took part in an individual race, a paired race, and two relays.  The showed great team spirit and continuously encouraged one another.

The Ambergate Primary School kwick cricket team are through to the area finals after an excellent bowling and batting display at Eyes meadow. 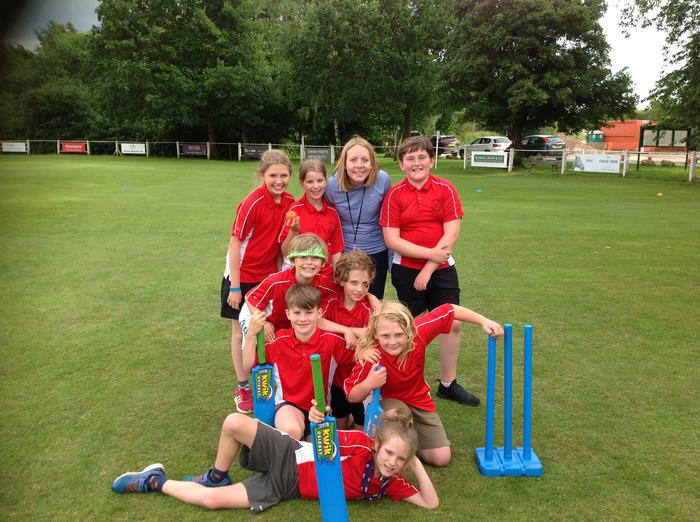 A a team of Year 1 and 2 children took part in a football competition at Belper Leisure Centre.  They did really well and showed great defending skills. 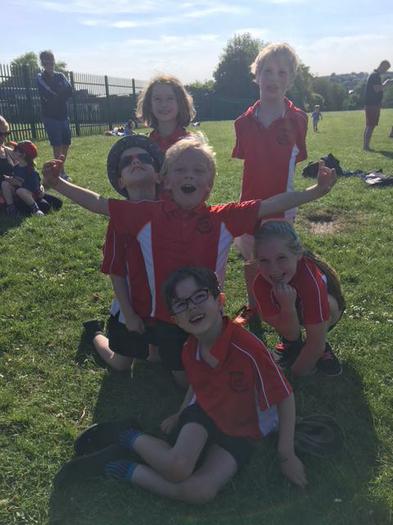 Mrs. Robertson took a team to the annual completion in Derby.  The children performed really well, competing against much larger schools, they held their own!

Mrs. Robertson took a talented team of year 2 pupils to this athletics festival at Belper.

Mrs. Robertson took a team of year 5 and 6 pupils to the competition in Alfreton.

Mrs. Turner enrolled a team of 15 KS2 children onto a Brownlee Brothers triathlon at Woodlands Primary School. The race was a part of the Olympians’ foundation programme and both were at the event to offer encouragement to the children.  It was a non-competitive event and aimed at introducing the children to triathlon.  A good time was had and many thanks to the brothers and the organising team!

Unfortunately not the ones with chocolate chips.

Some cookies are necessary in order to make this website function correctly. These are set by default and whilst you can block or delete them by changing your browser settings, some functionality such as being able to log in to the website will not work if you do this. The necessary cookies set on this website are as follows:

Cookies that are not necessary to make the website work, but which enable additional functionality, can also be set. By default these cookies are disabled, but you can choose to enable them below: